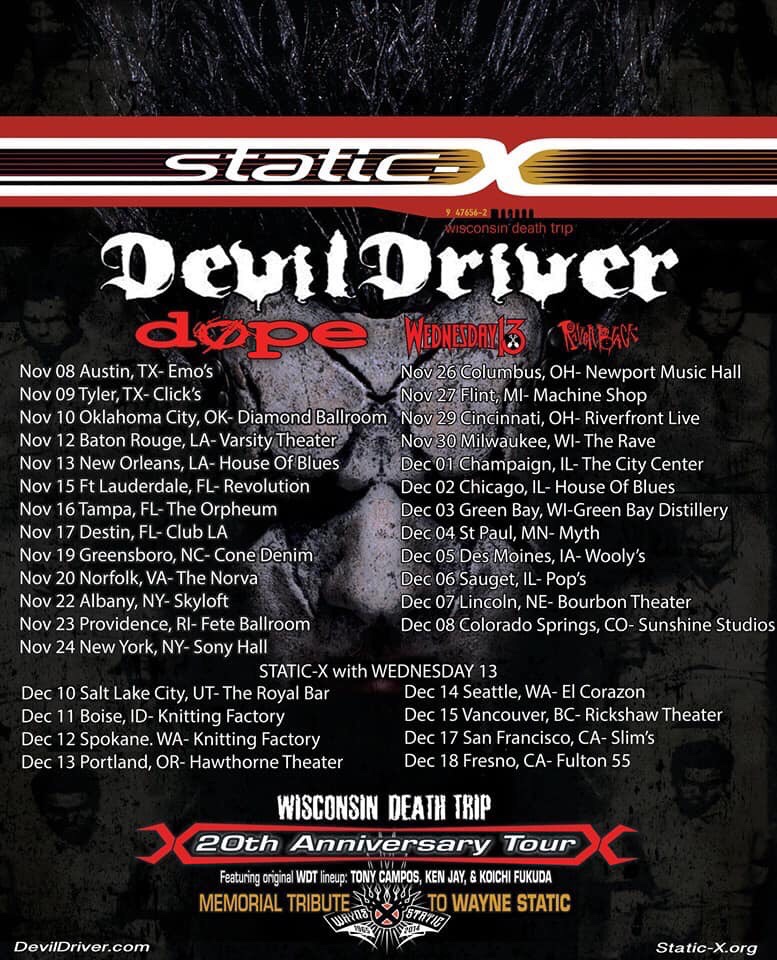 STATIC-X and DEVILDRIVER are continuing their onslaught of North America this fall with a second leg of the massively successful Wisconsin Death Trip 20th Anniversary tour! With several sold out shows from the first leg under their belts, STATIC-X and DEVILDRIVER will once again be joined by support acts Dope, Wednesday 13 and Raven Black, kicking off the second leg on November 8 in Austin, TX.

The full line-up will tour through December 8. Then, from December 9-18, STATIC-X will headline solo shows in the Pacific Northwest with Wednesday 13 as direct support.

Tony Campos of STATIC-X says, “We are so honored and grateful to all the fans who came out and supported the Wisconsin Death Trip 20th Anniversary tour! The response was absolutely overwhelming! There were a number of places that were left out of the first leg, so we are very excited for the opportunity to circle back and celebrate all the good times we had with Wayne. We look forward to giving those fans an opportunity to pay their respects with us and to experience Wisconsin Death Trip once again before 2019 comes to a close. From the bottom of our hearts, thank you all!”

Masked STATIC-X vocalist Xero adds, “The first leg of the tour was absolutely insane! Almost every single show was SOLD OUT! Thank you to everyone for being so supportive! We are very excited to be able to get out there and hit a bunch of cities that didn’t appear on the first leg.”

Dez Fafara of DEVILDRIVER adds, “The last tour was so successful, with most dates sold out or close to it, that of course we are honored to be part of this package again.”

Edsel Dope of Dope offers, “The first leg of the tour came and went so fast. Every night was a massive celebration of Wayne and of 20 years of Wisconsin Death Trip, and Felons and Revolutionaries. Hearing Dez singing “Loco” nightly has just been crazy! It’s like a fucking time warp and it’s just been so sick! The package is amazing! The fans are loving it… I’m so glad that we get to do it all again before 2019 comes to a close.”

Wednesday 13 says, “We are excited to announce that we are part of the second leg of the Wisconsin Death Trip 20th Anniversary tour with STATIC-X and DEVILDRIVER. This tour has been amazing so far, and we can’t wait to do it again. Look for an all new album and show from us the second time around.”

Raven of Raven Black adds, “It has been an honor and privilege to have shared the stage with so many legendary bands we each have grown up listening to as fans. We have been overwhelmed by the love we’ve received by their fans. It has been an amazing and life changing experience for us and we are so excited to be on part two of this tour this fall. We are forever grateful for the opportunity and support.”

Featuring support from Wednesday 13 ONLY – NO DEVILDRIVER, Dope or Raven Black

The original STATIC-X line-up from the 1999 platinum-selling debut full-length album, Wisconsin Death Trip – bassist Tony Campos, guitarist Koichi Fukuda and drummer Ken Jay – are putting the finishing touches on their seventh studio album, entitled Project Regeneration. The album will feature 12 brand new STATIC-X tracks and contains several vocal performances and musical compositions by Wayne Static. Along with the help of STATIC-X’s long-time producer Ulrich Wild, the band is in the process of completing the album now.

A new teaser featuring clips from a brand new music video, as well as five new STATIC-X tracks – “Road To Hell”, “Something Of My Own”, “Terminator Oscillator”, “Hollow” and “Disco Otsego” – along with a personal message from bassist Tony Campos about the inspiration behind Project Regeneration, is available to view now at www.static-x.org. Pre-orders for Project Regeneration are also available via the band’s homepage.